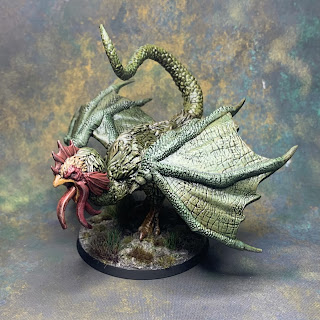 This big beasty was an experiment in almost exclusively using Games Workshop Contrast Paints to paint a large
figure - I'm happy to report that it was a success! The figure is a Cockatrice from the Joan of Arc 15mm Board Game/wargame. I’ve removed the plastic base it arrived on and mounted it on a 60mm round GW BASE - the creature is big at 28mm so it’d be gigantic at 15mm! 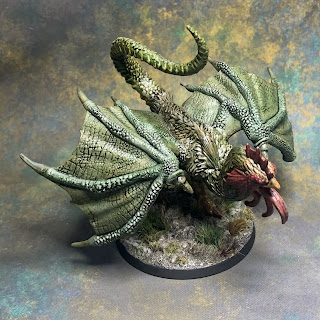 The rest of the range for the game looks absolutely amazing - they have a fantastic range of monsters as well as more down to earth medieval humans that are really so detailed for 15mm miniatures! 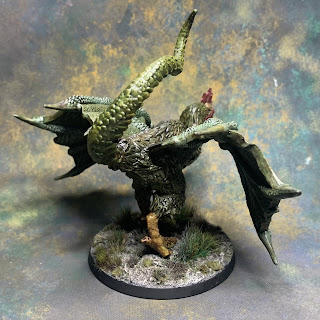 I think I can call this result a success - the surface texture is perfect for use with Contrast paints. This was painted in a couple of hours!
Posted by Deserter at 20:44 No comments:

I received the latest White Dwarf in the post last week and loved the idea of Hobby Bingo (to be honest, I've loved the idea since Rob Hawkins first posted it on his wonderful Hobby Blog, it's a shame that he didn't get credit when GW nicked it and repurposed it as the Middle Earth Hobby Bingo and now the White Dwarf version!), I sent a quick snap of it to my great friend Lewis at The Die Is Cast!, who challenged me to start it with him! 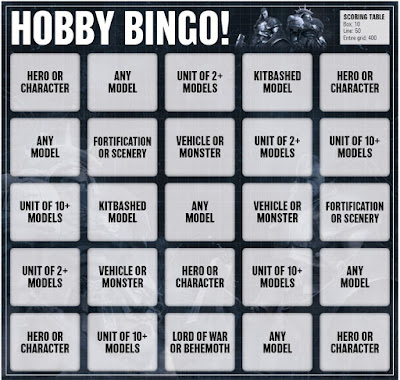 Well, I could hardly say no, could I?

2020 has been a truly dire year for my hobby goals - I'd had so many plans and then, as they say, those plans met the enemy and did not survive contact. Here's to 2021 and hopefully, many games!

Oh, we've also decided to start it straight away, counting anything that we paint now for our January scores! I'll be updating with the miniatures I finished recently and some information about that new project in the next day or so.

Posted by Deserter at 23:30 No comments:

Well, I mentioned I’d done a little work on some zombies! 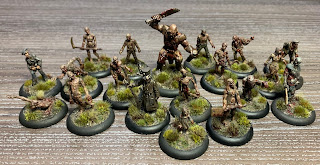 My small horde of zombies that will be used in various fantasy games (Rangers of Shadow Deep soon I hope!) as well as anything upto Victorian Gothic Horror type settings. They’re largely from Heresy Miniatures, sculpted by Paul Muller (I have more Ghouls by him in the to-paint pile and even more in the to-show-off-on-the-blog pile!) with some exceptions.There are a few that won’t work on one setting or another - most of the Heresy ones will work in most settings, but there are some from Empire of the Dead, from Westwind Productions, and a couple of those have anachronistic flat caps! There’s also the zombie ogre from Reaper Bones (who received new hands and weapons from GW plastic orc bits as I didn’t like the original overly bendy ones!) who is fantasy-only and a draugr from the wonderful Blood Rage boardgame that will mainly see use in fantasy dark age type games! 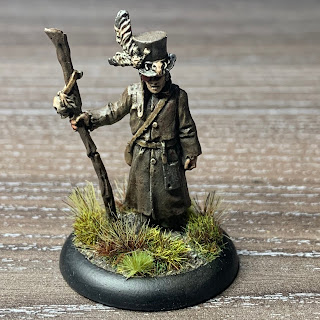 I also picked up this splendid Gothic Horror Necromancer-type from Northstar - perfect to be using a few zombies to help him recover the materials needed to complete his flesh golem masterpiece! 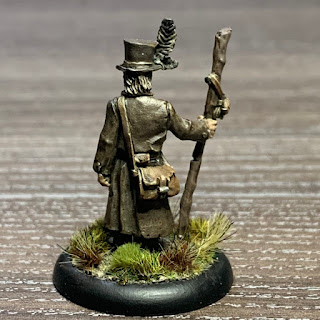 I’m currently working on a bunch of other dark magic user sorts, bloody corpse botherers the lot of them! More on them soon!
Finally, a few pictures of the more interesting zombies in there: 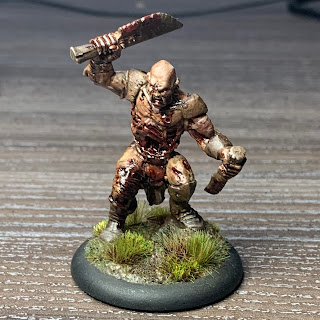 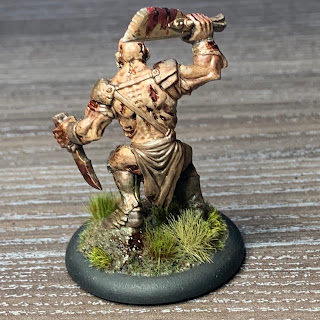 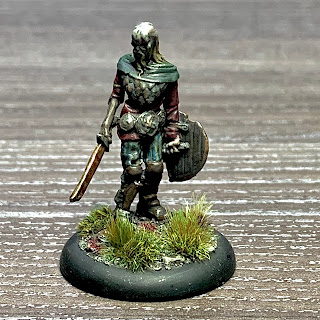 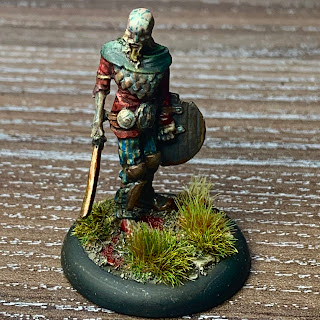 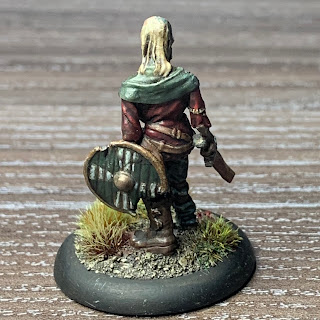 I saw this on Facebook today and had to repost it here as it's a work of art.
It's a question from the website Quora, with a response by someone called "Nate Smith". It sums up a lot of my feelings about Trump in a very poetic manner.
“Why do some British people not like Donald Trump?”
A few things spring to mind;
Trump lacks certain qualities which the British traditionally esteem.
For instance, he has no class, no charm, no coolness, no credibility, no compassion, no wit, no warmth, no wisdom, no subtlety, no sensitivity, no self-awareness, no humility, no honour and no grace – all qualities, funnily enough, with which his predecessor Mr. Obama was generously blessed.
So for us, the stark contrast does rather throw Trump’s limitations into embarrassingly sharp relief.
Plus, we like a laugh. And while Trump may be laughable, he has never once said anything wry, witty or even faintly amusing – not once, ever.
I don’t say that rhetorically, I mean it quite literally: not once, not ever. And that fact is particularly disturbing to the British sensibility – for us, to lack humour is almost inhuman.
But with Trump, it’s a fact. He doesn’t even seem to understand what a joke is – his idea of a joke is a crass comment, an illiterate insult, a casual act of cruelty.
Trump is a troll. And like all trolls, he is never funny and he never laughs; he only crows or jeers.
And scarily, he doesn’t just talk in crude, witless insults – he actually thinks in them. His mind is a simple bot-like algorithm of petty prejudices and knee-jerk nastiness.
There is never any under-layer of irony, complexity, nuance or depth. It’s all surface.
Some Americans might see this as refreshingly upfront.
Well, we don’t. We see it as having no inner world, no soul.
And in Britain we traditionally side with David, not Goliath. All our heroes are plucky underdogs: Robin Hood, Dick Whittington, Oliver Twist.
Trump is neither plucky, nor an underdog. He is the exact opposite of that.
He’s not even a spoiled rich-boy, or a greedy fat-cat.
He’s more a fat white slug. A Jabba the Hutt of privilege.
And worse, he is that most unforgivable of all things to the British: a bully.
That is, except when he is among bullies; then he suddenly transforms into a snivelling sidekick instead.
There are unspoken rules to this stuff – the Queensberry rules of basic decency – and he breaks them all. He punches downwards – which a gentleman should, would, could never do – and every blow he aims is below the belt. He particularly likes to kick the vulnerable or voiceless – and he kicks them when they are down.
So the fact that a significant minority – perhaps a third – of Americans look at what he does, listen to what he says, and then think ‘Yeah, he seems like my kind of guy’ is a matter of some confusion and no little distress to British people, given that:
Americans are supposed to be nicer than us, and mostly are.
You don’t need a particularly keen eye for detail to spot a few flaws in the man.
This last point is what especially confuses and dismays British people, and many other people too; his faults seem pretty bloody hard to miss.
After all, it’s impossible to read a single tweet, or hear him speak a sentence or two, without staring deep into the abyss. He turns being artless into an art form; he is a Picasso of pettiness; a Shakespeare of shit. His faults are fractal: even his flaws have flaws, and so on ad infinitum.
God knows there have always been stupid people in the world, and plenty of nasty people too. But rarely has stupidity been so nasty, or nastiness so stupid.
He makes Nixon look trustworthy and George W. look smart.
In fact, if Frankenstein decided to make a monster assembled entirely from human flaws – he would make a Trump.
And a remorseful Doctor Frankenstein would clutch out big clumpfuls of hair and scream in anguish:
‘My God… what… have… I… created?’
If being a twat was a TV show, Trump would be the boxed set.
Posted by Deserter at 19:55 No comments: